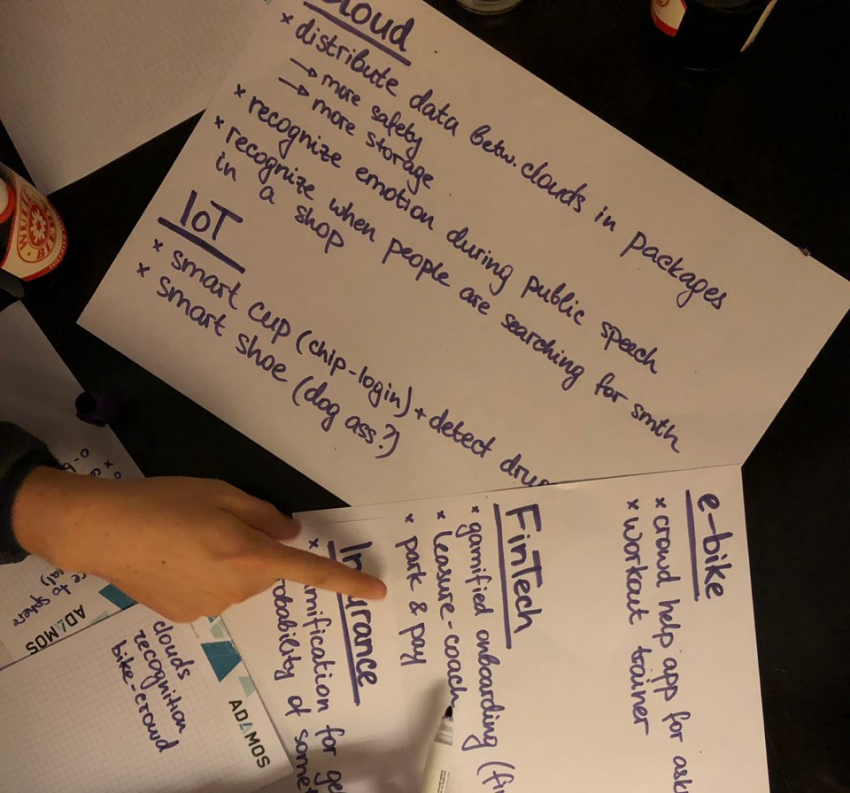 Day one on the Stuttgart Hackathon. Our team arrived in three parts:
– The hardcore ones who even took some vacation to get there in time.
– The cool ones who arrived later
– and there is Leon…
In this blog post, I am going to give you an impression of the hackathon.

Dear diary, it’s the first day on the Hackathon. Dominik, Danny and I chose to work on the cloud of clouds projects. Sören is also with us, but he works on another project with some friends. The idea behind of clouds is, that you are no longer limited to online storage. Instead, your data is distributed across all cloud provider. So no single cloud provider owns your data! In two days we can not develop a complete client with a CRUD implementation. As a result, we decided to develop a library and a simple CLI that allows uploading a file.

Actually, there’s not much to tell. Because we decided to sleep for a few hours the first night 🙂

Dear diary,
Dominik, Danny and I decided to do some kind of pair programming. We are just using Danny’s Mac Book for coding – no other pc is used! Funny… cause everyone is looking at us because the three of us cuddled up in the sleeping-corner to program in TDD style. Jop, you understand correctly we are doing test-driven development on a Hackathon! Actually, no one of us has done that before, so it’s awesome that we are working together on one pc. You might think “WTF TDD on a Hackathon?!” and you are right… It’s uncommon to write tests on a Hackathon, but we think it may be a great experience and we can learn a lot from it! In the end, a Hackathon is not about winning, it’s about learning!

We are getting closer and closer to full implementation. Developing in TDD style has changed our interfaces, which we created at the beginning. Those were magic moments! I’ve never developed TDD before, but it’s impressive to see how the test determines the shape of the code.
But we still haven’t connected Dropbox or Google Drive. However, the time is running out! It’s time to unpack our secret weapon, the Crack-Hoe-Pattern. You’re probably wondering what this is ? It’s a design pattern for software that we’ve been using for some hackathons. Using the Crack-Hoe pattern you can achieve maximum encapsulation of ugly code. You put everything into a class called Crack-Hoe. Using a single access point, the magic method, the ugly code can then be executed.

But despite our secret weapon, the crack-hoe pattern, we had to sleep in shifts to get through the implementation.

Phew… we made it. Shortly before 9 am we implemented our use case to upload a file, as well as a CLI client. The pitches take place in two rounds. In the first round, you have 5min time to convince the jury. The 20 best ones are allowed to pitch on stage for 3 minutes. But there are several hours between round one and round two. So time to catch up on some sleep!

The 20 best teams will be presented… and… and… and… Oh no! We are not among the 20 best 🙁 But hey, you can’t win every hackathon! Also, it has something good not to have to pitch again, you can drink a beer with a good conscience. So, we all sat together for a beer and listened to the pitches of the other teams 🙂

BTW Leon never arrived. But we still love him very much 🙂

1 thought on “The Stuttgart Hackathon Diary”